Coronavirus (COVID-19): Click here to learn how we are protecting our patients, community, physicians and staff.

Join us for a mini Zoom class on childbirth!

Every Tuesday afternoon at 4pm.

Call your Dr’s office to reserve your spot! 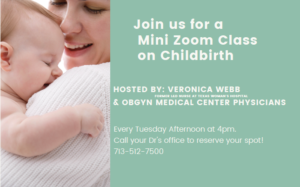 The following issues/problems can be seen virtually through a virtual visit appointment! Please schedule online or contact our office to make an appointment.

We at OBGYN Medical Center Associates pray for the continued safety for our patients and our team members. Harvey dealt a significant blow to our community and we will be reeling from that in the days, weeks and months to come.

Starting Thursday, August 31, we will re-open our doors for patients at the 7900 Fannin office. Please know you can also go online to schedule your appointment at www.obgynmedicalcenter.com.

For those patients who see one of our providers at one of The Woman’s Places located in Kingwood, Willow Brook, Memorial, Sugar Land, Pearland and Webster, we have been informed those offices will remain closed until September 5. Please call our office at 713-512-7500 to reschedule your appointment to the Fannin office.

Our employees and their families have experienced all of the flooding and devastation many of you have experienced. As a result, we will be short staffed as they care for their families, their homes and their possessions. Some were and are under mandatory evacuation. For our patients who are coming to see their provider for your annual well woman exam, we respectfully suggest you consider rescheduling your appointment. Please know you won’t lose your place in line as we will be expanding our hours including, Saturday appointments to meet the pent up demand for re-scheduling more than a week’s worth of appointments. Thank you for understanding.

Please continue to check our website and Facebook page for updates on a day to day basis.
As always, if you are experiencing a medical emergency, please call 911 or visit your nearest emergency center.
Mar 15

Thank you for choosing OBGYN Medical Center Associates. As a friendly reminder, please complete the health questionnaire on the patient portal prior to your appointment.

We look forward to seeing you at your upcoming appointment!

According to the Centers for Disease Control and Prevention, here’s what we know about the Zika Virus:

Pregnant women can be infected with Zika virus.

• The primary way that pregnant women get Zika virus is through the bite of an infected mosquito.

• Zika virus can be spread by a man to his sex partners.

A pregnant woman can pass Zika virus to her fetus.

• Zika virus can be passed from a pregnant woman to her fetus during pregnancy or at delivery.

Protect yourselves from getting Zika from mosquito bites

• Mosquitoes that spread Zika are aggressive daytime biters. They can also bite at night.

• Insect repellent is safe and it works! Read the label and follow the directions.

• Use screens on windows and doors. Use air conditioning when available. Empty containers with standing water.

Dr. Crawford was born and raised in the Carolinas with her three younger siblings. After graduating with honors from the College of Charleston in Charleston SC, where she completed her undergraduate education, Dr. Crawford attended medical school at the University of South Carolina School of Medicine in Columbia, SC. She then completed her training in Obstetrics and Gynecology at the University of Minnesota in Minneapolis, MN. During her final year of residency, she was elected to serve as Chief Resident.

Dr. Crawford’s research interests include subclinical hypothyroidism and infertility as well as factors influencing sex hormone-binding globulin. Her academic research in the later was selected for publication in the peer-reviewed journal, Fertility and Sterility. Her clinical interests include gynecologic surgery, obstetric care, pelvic pain, and infertility. She has completed certification in the Davinci surgical system, Nexplanon and Essure.

Obstetrics and Gynecology was a natural fit for Dr. Crawford as women’s health and advocacy has been a lifelong interest for her. She enjoys having the opportunity to establish longstanding relationships with her patients, and the privilege of caring for women throughout all stages of their lives.

Thank you for visiting our new website – please read through it to learn about our practice!

The spread of the mosquito-borne Zika virus has become a world-wide concern, with the World Health Organization declaring it a global health emergency. This is the first time the agency has used that classification since the deadly Ebola outbreak in West Africa.

Here’s the latest on the virus, which has been linked to an alarming birth defect among newborns.

The WHO has declared a global health emergency for the just the fourth time in the agency’s history due to the ongoing Zika outbreak. The organization is now releasing recommendations for countries facing a Zika outbreak, including new travel measures.

The recommendations include improving communications so that an affected community is reporting possible cases, increasing surveillance of Zika virus infections and taking measures to control the mosquito population.

Additionally, WHO has advised travelers be updated about the potential risks, but that trade between countries should not be disrupted by the outbreak.

The U.S. Centers for Disease Control and Prevention has expanded travel advisories for a total of 28 countries and territories where there are reports of the Zika virus currently being transmitted from mosquitoes to humans.

What Does the Virus Do?

The virus has also been associated with a rise of microcephaly birth defects in which an infant is born with an abnormally small head, which can cause significant developmental delays.

The CDC is also investigating if a rare paralysis syndrome called Guillain-Barre is related to the virus.

The syndrome is an immunological reaction that can also occur after other viral or bacterial infections.